We had demonstrations in support of Michael Brown and Eric Garner for the past month. People from different countries, creeds and all walks of life marched united against the use of force and race by the Police. I saw students marching in New York, posting photos on instagram and reporting news to the world from their smart phones. I was very happy to see our young generation together, white, black, brown, and yellow fighting together in the trenches for a cause. I was very disappointed at our black celebrities and professional athletes though. I expected more from our African American Community. Where was Oprah? P. Diddy? All of our NFL athletes? NBA players? Tyler Perry? They are making millions every year but no word from them. My hat goes to the few NBA players that are wearing the “I can’t breathe” shirts but brothers and sisters we need more demonstrations. Believe me your voice can go a long way and will transmit worldwide. All eyes are on the United States constantly every nation in the world is glued to their television to see more news about the US. 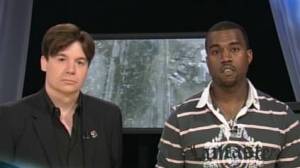 We all remember that scene like it was yesterday.

A few years back when we had Katrina nobody really cared about the people of New Orleans until one man spoke from his heart. That man brothers and sisters was Kanye West. You remember that day on the telethon when Kanye said, “George Bush does not care about black people”. Though he was criticized repeatedly by the media his voice went viral all over the world and all nations spoke about how the most powerful nation in the world could not help their citizens. Believe me after Kanye West, FEMA started to work the way they were supposed to. We need more heroes like Kanye to speak up. You have millions of followers on twitter who worship you sent at least a tweet and support the cause.
We can’t hide behind the shadows and expect results, we need to stand up. You may think that just because you are wealthy living in a gated community you are saved from police brutality, but believe me you are not, like Kanye West once said it, “Even if you in a Benz you still a NIGGA”.